I spotted this on another blog, and am reposting because it's ridiculously beautiful. Do yourself a favour. Sit down for 3.21 mins, close your eyes and listen.
Posted by Jonathan at 3:48 pm No comments:

The Baptist Union of Great Britain is currently engaged in a review and discernment process about the shape of our structures and ways of relating and resourcing. Today and tomorrow the BU Council meets to make some decisions that have potentially profound effects upon our life and witness together.

Simon Perry, a Baptist Minister, has written this prayer. I share it with you in the hope that you'll join us in praying for the future that God desires to be a reality.

Lord of time and space, we thank you for the good gifts granted to us:For the place you have given us in history; for the corner of the world in which you have called us to serve; for the people whose lives are interwoven with ours; for the convictions that we treasure; for the heritage that shapes us.

As the Baptist Union Council meets to explore your will for our ways of living together, we thank you again for the Baptist heritage in which our identity is rooted.  For the urgency of mission, and the desire to build colonies of heaven within a world of injustice.

For the passion to relate well to others within and beyond our church communities;For the practical theology and the readiness to hear your voice in others, For the pragmatism that works around circumstances in the quest to see your will done on earth.

So as we take stock, and assess again where we are in our walk with you, we are conscious of the cold financial realities we face.
As our Futures Group explores with Council how we might reconceive our ways of being together, we pray for wisdom: wisdom to trust that you are not confined by the structures we have long thought necessary; wisdom to find alternative ways honouring you with our minds, our mission and our worship.

We pray for holiness: Holiness to hear your word in whatever voice it comes; holiness to be open to a divine will that may liberate and transform us because it threatens and disturbs us.

We pray for vision: The vision to find opportunities for faithfulness where we have been neglectful; vision to see you at work in places we hadn't recognised you.

We pray for courage: Courage to explore new church structures and new ways of being together; Courage to change what we thought was unchangeable.

Lord of time and space, meet with us here and now, and grant us the faith to entrust our future to you.

The Revd Simon Perry  http://simonperry.org.uk/
For a question and answer session on the Futures process visit
http://www.baptist.org.uk/about-baptists/bugb-futures/853-future-of-the-baptist-union-of-great-britain-q-and-a.html
Posted by Jonathan at 11:17 am No comments: 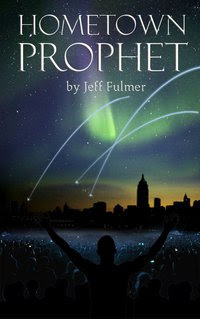 Set in contemporary Nashville, Tennessee, Fulmer's novel ponders on what might happen if a prophetic gifting like that of an Amos or Micah might appear on the charismatic church scene today.

I’m writing from the perspective of the UK church, so the sharp divisions that appear to exist in the American church between the Christian Right (which is here portrayed to be neither Christian nor right...) and more open evangelicals are less apparent in the church in Western Europe. Nevertheless, the attitudes towards prophetic ministry are worryingly similar, with prophecy being reduced to some encouraging "the Shepherd loves his sheep" message as opposed to the call to challenge corrupt systems and institutional wrongdoing.

So the central question -what would happen if that kind of gift were exercised? - and the responses the book suggests would come from the wider church, people of other faiths, the media, government agencies and wider society have a resonance here too.

Peter, our central character is not a flimsy carapace upon which to project the story, but realised as a person with depth, with failure as well as success, and who is, ultimately, a human, just like us.

The story does, at times, seem to rely on stereotypes and issues rise and are included seemingly aimed at irritating the section of the church the book sets out to challenge most strongly; so our hero speaks in favour of environmental protections, prophesies to bless people of another faith, and challenges issues around human sexuality. These may be seen as the big issues from some perspectives, but I wonder if God were to raise up prophets to speak into western society these would be the issues He'd address. That might just be an interesting discussion for a dinner party, and ultimately these are the issues our prophet is inspired to speak out on.

So, faced by a varied response, our prophet's influence rises, and so does resistance and rejection.

How this all works out, including a good twist, makes for great reading, and although Fulmer's no Shakespeare, the story romps along, with this reader keen to see how the hero fares in the end.

The questions behind this book and the challenge to the church that has made prophecy a comforting thing alone could have been an angry preach, or a long treatise urging reform. By presenting us with a story Fulmer invites us and involves us in a more exploratory journey, giving us space to consider issues and people, and perspectives sometimes overlooked.

I'd want to recommend this to charismatics and non-charismatics, to evangelicals and to liberals, and to those who don't know what they are. Perhaps as a result they'll join with me in a prayer for a true restoration of prophecy to the church, not the sham we often see dressed up in its clothes.

For more on this book, see: http://www.hometownprophetbook.com/

Posted by Jonathan at 3:27 pm No comments: