Showing posts from April, 2008
Show All 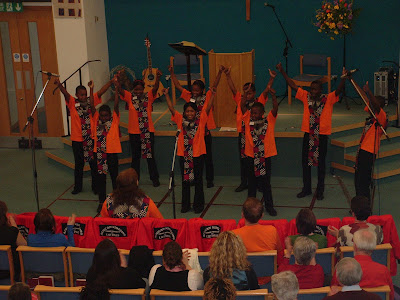 Yesterday was a day of celebrations. in the morning i led a service for the Boys' Brigade here. Each year the local battalion gathers at one of the churches to join in a service, and to be together for a time of sung worship and celebration. The nearby URC church hosted us, and 130+ people from the Brigade joined with the usual congregation of 25 or so - it looked like a coup! We had a fun hour together, reflecting a little on how God has been using the Brigade as a tool for discipleship in the lives of young men, before considering what we might all do as we wait for the appearance of Christ again (this being the time between Easter and Ascension, then Pentecost - a great season to think about waiting). I had fun, folks enjoyed it, and people went away thinking about how they might grasp God's passion for them and the world, God's power to live in a way that is distinctively that of a Christ-follower, and to know and be God's presence in thier own homes, workplaces, sc
Post a Comment
Read more 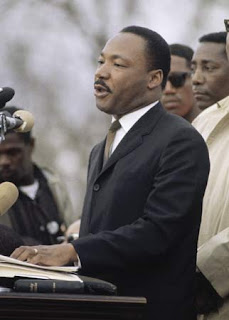 Today is the 40th anniversary of the assassination of Revd Dr Martin Luther King Jnr, and this is the last in a short series of posts that have sought to share something of his message, in places particularly timely for the situation we find ourselves in. In meditating on his words these past days I’ve been acutely aware that often the words we read about and the descriptions of Dr King come from others. So today I share with you a quotation from “The Drum Major’s Instinct”; a sermon King preached at Ebenezer Baptist Church, Atlanta, Georgia on the 4th February 1968, just two months before he was killed. Here we see how King understood himself, his faith, and his position as one seeking to see the kingdom of God - a kingdom of justice and love - established, strengthened and extended. From “The Drum Major’s Instinct”, Every now and then I guess we all think realistically (Yes, sir) about that day when we will be victimized with what is life's final common denominator—that somethi
3 comments
Read more 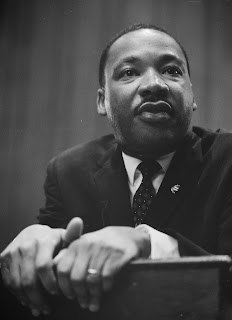 This is part five of a series of postings reflecting on the life and message of Revd Dr Martin Luther King Jnr, in the days leading up to the 40th anniversary of his assassination on 4th April 1968. Today I post two quotations from his final speech, the world famous “I have been to the Mountaintop” speech, giving us insight into the mind and faith of King as he reflects on the struggle for freedom, and as he is painfully aware of the threats against his health and security. These words were spoken on 3rd April 1968, the eve of His death. Something is happening in our world. The masses of people are rising up. And wherever they are assembled today, whether they are in Johannesburg, South Africa; Nairobi, Kenya; Accra, Ghana; New York City; Atlanta, Georgia; Jackson, Mississippi; or Memphis, Tennessee -- the cry is always the same: "We want to be free." And another reason that I'm happy to live in this period is that we have been forced to a point where we are going to have
Post a Comment
Read more 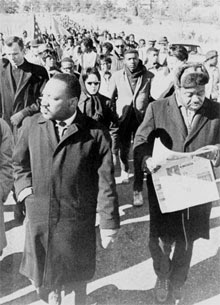 This is number four in a series marking th e martyrdom of Revd Dr Martin Luther King Jnr, the 40th anniversary of which falls this coming Friday, April 4th. The struggle for equality in Alabama continued and on March 25th 1965 a great march from Selma to Montgomery was organised. Speaking to the crowd at the end of the march King addresses the question of “How long?” that hung in the air. Today’s quotation comes from that speech, and as I read it I have in mind the struggle to end extreme poverty, as well as injustices like Darfur, Palestine, Guantanamo Bay and some of our own detention policies. I know you are asking today, “How long will it take?” I come to say to you this afternoon however difficult the moment, however frustrating the hour, it will not be long, because truth pressed to earth will rise again. How long? Not long, because no lie can live forever. How long? Not long, because you still reap what you sow. How long? Not long, because the arm of the moral universe is long,
Post a Comment
Read more 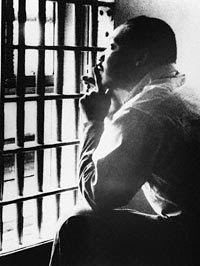 This is part 3 of a special series this week, in memory of Revd Dr Martin Luther King Jnr, who was killed by men of hate forty years ago this Friday. I guess the most well known of Dr King’s teachings come from three places, the I have a dream speech, the Mountain Top message and the Letter from Birmingham Jail . It would be incomplete to have this series without some of those great inspiring words, so today’s quotation comes from part of the Letter from Birmingham Jail . On April 12th 1963 – Good Friday that year - King and some colleagues were arrested for staging protest marches in Birmingham, Alabama. That same morning, several white ministers had written an open letter to King that had been printed in the local newspaper, calling on him to end the protests, and labelling him an anarchist, an extremist and a lawbreaker. King's reply, a few days later on the 16th April 1963, from his cell in Birmingham Jail, was to pen the now-famous Letter from Birmingham Jail . It is a calm
Post a Comment
Read more
More posts