Showing posts from February, 2012
Show All

Pat Took, Listening, Church Meetings and the Future of BUGB

February 28, 2012
I knew that snappy title would capture your attention.... Last week I attended the Heart of England Baptist Association (HEBA) Ministers’ Conference. We were privileged to have some thought-provoking, and quite challenging teaching from Pat Took (Current BUGB President, former Regional Ministers Team Leader in the London Baptist Association) and Roy Searle (Northumbria Community, former BUGB President also).  The subject was “Listening” and, as Roy Searle’s grandson had pointed out, you might have thought ministers wouldn’t have needed much teaching on that. However, of course we do, we need to regularly be reminded of our call, and all that that entails. I tweeted during one of Pat’s sessions, and some folks asked if I could collate them in one place, so I do so here.  My feeling is that what she said has relevance far beyond our own interpersonal relationships and church meetings, and might say something to the current conversation about the future of the Baptist Union. I
3 comments
Read more 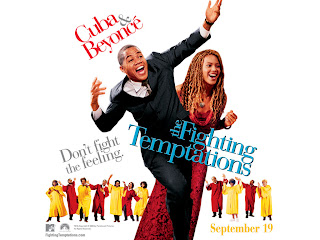 Last night at MovieChurch we watched “the Fighting Temptations”. It’s the second time we’ve watched this film together (although, in my defence, the first time since we amalgamated evening congregations with another local church). I’d originally intended on screening “Liar Liar”, but having been a little unsure of some of its content, watched it a third time and pulled it, a shame because it has some nice themes worth exploring. So, a film to start Lent with. Was it a good choice? It really was. There are echoes of lent in the movie, with the heart of the story being a 6 week preparation for a choir competition called “Gospel Explosion”. The choir of Beulah Baptist Church has to go through many travails to get to the event, including ridding itself of some bad habits, embracing the marginalised and the outsider, and going through crises or faith and conscience. Cuba Gooding Jnr displays a fine comic sensitivity, whilst drawing out some great depths from his character, the down-on-hi
Post a Comment
Read more

February 07, 2012
Here at Tab we're praying about our closer working relationship with another church in the city. In our March Church Meeting we hope to be coming to some conclusions about the shape of the way forward. Please would you join with us in praying about this. Merging two congregations isn't an easy thing to do, but if it's what God has for us, then we'll glady embrace it! The Leadership Team at Tab is encouraging prayer using the following points as a guide, a starting place.  We're asking folks to pray especially each Tuesday, and join with others as we also fast on 7 th  Feb and 6 th  March. We will also provide one Saturday morning and two evening seminars to discuss the vision Please Pray: For our brothers and sisters at Church @ Broad St. About our own desire to be a church for both Whitmore Reans, and the whole City of Wolverhampton That there’d be a strong Christian presence and voice in the City Centre That we’d have wisdom to make the most of a valuabl
Post a Comment
Read more
More posts