I am so looking forward to the rerelease of U2’s The Joshua Tree. Like so many people, it was the album that first turned me on to them.

It looks like some extra material that wasn’t on the original recording is going to make it into this one, and I came across a short film (8 mins or so) where Bono is talking about one of these songs and its meaning.

I'm posting this clip because I found it moving, but more than that because it's a very intimate little film that gives us an insight into the creative process and theological craft of Bono.

I hope you enjoy it, and find it as inspirational as I did.

If you haven't clicked on the link in my blogroll to The Ongoing Adventures of ASBO Jesus you really should.

I love the simplicity of the message and the medium, this cartoon recently spoke heaps to me.

Check it out today.
Posted by Jonathan at 8:27 pm No comments:

What's wrong with this picture? 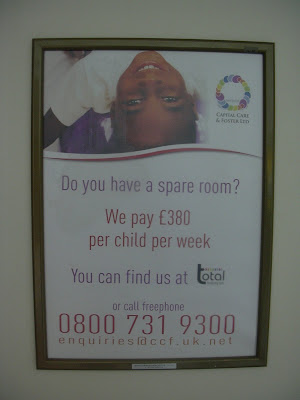 I saw this poster recently, in fact there were quite a few of them, dotted around, near the exits of our local shopping mall.

I had to do a double-take, wondering if I'd really seen what I thought I had.

Just in case you can't quite work it out, the poster asks first if a person has a spare room, then informs that this agency gives £380 per child per week. It's in the smaller print that we learn that the agency is a care and foster agency.

Isn't the message here a bit off key? When did we, as a community, start seeing foster care primarily as a financial issue? Isn't it odd that the recruitment doesn't mention a caring attitude to children, or a desire to help?

Is foster care in our capital city just a business transaction?

Isn't this hugely offensive, or am I over-reacting?

I'm sure that the agency would do proper training and checking of suitability, but it's just mad that the basis of the appeal for more foster carers is that it's a money-spinner. Are cared-for kids just a means to a healthier bank balance for some?

Posted by Jonathan at 8:04 pm No comments: 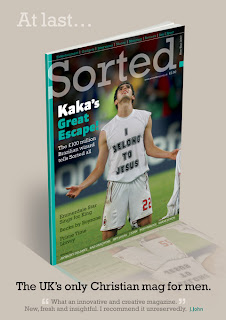 From time to time I recommend books and magazines, and I’ve come across a new mag I want to encourage you to get hold of.

A few years ago, some friends and I started an organisation called Geezers for Jesus, we wanted to do a few things, one was to provide an online resource for guys to talk about the realities of living as both a Christian and a man in today’s world with all the challenges that entails (a quest for an understanding of what might be called a masculine spirituality), the other was to facilitate men’s gatherings around the country to be more relevant in their approach to men’s’ ministry.

Well, the first part, the online resource has existed for a quite a while http://www.geezersforjesus.org.uk/ , the second part has been slower coming.

With my Geezers for Jesus hat on I was delighted to find that Wesley Owen are stocking the new magazine Sorted, solidly geared towards Christian men, and british men at that! – rather like The Blokes’ Bible, this is real, accessible and relevant, not dodging tough issues. It’s got a good diversity of writers, and subjects and it’s quite cheap (£2.50).

Get to your local Christian bookshop and buy a copy, for you or the men in your life, and if they’re not stocking it yet, get them to. See also http://www.sortedmag.org.uk/
Posted by Jonathan at 11:39 am 2 comments:

To wear a poppy?

Over on his excellent and thought provoking blog Leaving Munster, Graham has been writing about his attitudes and response to the wearing of a red poppy.

It's a subject that I have often wrestled with and so I replied to his posting there, but also thought I'd like to hear your points of view. Essentially Graham argues that the wearing of the red poppy, coupled with a nationwide act of remembrance where every soldier who died is lumped together as valiant and noble perpetuates the myth that war solves things, and glorifies the sacrifice of armed service personnel.

Here's my response - what do you think?

And yet, I do feel conflicted. On the one hand I hate that war occurs and I hate that people die. On the other, I live in relative freedom, one that in all truth I doubt I'd live in if certainly the second world war had been lost.

I also feel torn that there are people who - whether I like it or not - fight in my name. I'm not relinquishing my British citizenship anytime soon.

And when the Govt doesn't support ex-service personnel well (regardless of whether they saw active service or not) the wearing of a red poppy might at least make a small donation, and show support for the charity, not necessarily the wars that were fought. It seems in many ways to be an anti-war statement to wear one, if the true meaning is understood. We wear the poppy because people die in wars, ergo, war is a bad thing.

I'm sure that I am totally biased, I grew up in a military household, and both my grandfather and father saw active service, my brother who serves still has spent time in the Gulf.

So, what do we do with that? The work and the intent of the Royal British Legion (as much as we might wish that the govt would - if it's going to wage wars - take care of people and thus make them redundant) is to be applauded and supported, no?

This Sunday I'll be teaching a little about St Martin. Since the 4th Century sections of the Church have remembered him on 11th November. He was converted to Christianity in late childhood, and was forced to join the cavalry in the Roman army aged 15.The famous part of his story is that upon seeing a beggar at the gates to Amiens he cut his cloak in half, giving half to the beggar. His had a dream that night, where he pictured Jesus wearing the half cloak, and saying "I have been cloaked by Martin, the Roman soldier". Martin asked to leave the army, convinced that it conflicted with his faith, and was accused of being a coward. He offered to go ahead of the army, unarmed, to prove the issue was not one of bravery. He never had to as they enemy made peace, and he was discharged. He is probably the earliest recorded Christian conscientious objector.

As I speak, I'll be wearing a red poppy.