So, Let's be gracious with each other.

Thanks to Jon @ ASBO Jesus for this
Posted by Jonathan at 8:36 am No comments: 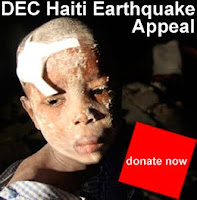 . Clicking on the picture for each agency ought to take you to thier site.

Baptist World Aid (BWAid), the relief and development arm of the BWA, is mobilizing search, rescue, and relief teams. A team from BWAid Rescue24, the search and rescue arm of the international Baptist aid organization is in Florida in the United States awaiting clearance to fly into Port-au-Prince, or to travel via the Dominican Republic, which shares the island of Hispaniola with Haiti.

s, who are experts in search and rescue missions, to travel from Hungary to Haiti. They are expected to travel with dogs and special equipment that can detect and find persons who may still be alive but are buried underneath the rubble.

BWAid has pledged an initial sum of US$20,000 for the relief efforts in Haiti, and is accepting other donations from Baptists throughout the world. Baptists in India, Taiwan, Panama, Germany, the United States and the United Kingdom have already made enquiries on possible assistance. The Jamaica Baptist Union, which partners with four Baptist churches and several schools in Haiti, including in Port-au-Prince, is positioning itself to offer assistance.

Over on the God's Politics Blog, Jim Wallis written a thoughtful piece about the current crisis in Haiti. I'm republishing here, but if you look at the original article, you'll find the comments as well.

Haiti: God Is Suffering With Those Who Are Suffering

There are times when events make everything else pale in comparison. I’m in Los Angeles today on my book tour, but the news of Tuesday’s 7.0-magnitude earthquake hitting Haiti is one of those times. Over the past few hours, I haven’t been able to take my eyes off CNN. The tragedy in Haiti is unbelievable — the pictures of the pain and destruction are haunting. My heart breaks for the families and the victims of this tragedy.

Information continues to develop, but what we already know staggers the imagination. Both the Haitian prime minister and consul general to the U.N. have said that as many as 100,000 people are likely to have died. The International Red Cross estimates that one-third of Haitians — about 3 million people — were affected by the earthquake. The Catholic archbishop of Port-au-Prince is known to be dead, and the chief of the U.N. mission in Haiti remains missing.

In a heart-rending story, the The New York Times reported on the scene in Port-au-Prince:

The tiny bodies of children lay in piles next to the ruins of their collapsed school. People with faces covered by white dust and the blood of open wounds roamed the streets. Frantic doctors wrapped heads and stitched up sliced limbs in a hotel parking lot.

The poorest country in the Western Hemisphere, still struggling to recover from the relentless strikes of four catastrophic storms in 2008, was a picture of heartbreaking devastation Wednesday after a magnitude-7 earthquake.

In response, the world is mobilizing. President Obama, in a statement, said:

I have directed my administration to respond with a swift, coordinated, and aggressive effort to save lives. The people of Haiti will have the full support of the United States in the urgent effort to rescue those trapped beneath the rubble, and to deliver the humanitarian relief — the food, water and medicine — that Haitians will need in the coming days. In that effort, our government, especially USAID and the Departments of State and Defense are working closely together and with our partners in Haiti, the region, and around the world.

The U.S. has sent Agency for International Development helicopter search-and-rescue teams, a U.S. Navy amphibious ship with medical capabilities, and is sending the USNS Comfort hospital ship. Other military and civilian aid teams are also on the way. Secretary of State Hillary Clinton has canceled the remainder of her trip in Asia to return to Washington to help direct the relief efforts. Canada, European nations, and countries across Latin America have mobilized supplies and aid.

As always, in this kind of natural disaster, it is almost always the poorest who suffer the most — those who have the least to lose are often those who lose the most. Life is always hard for poor people — living on the edge is insecure and full of risk. Natural disasters make it worse. Yet even in normal times, poverty is hidden and not reported by the media. In times of disaster, there continues to be little coverage of the excessive impact on the poor.

Tragic moments like this bring out the best in global citizens, as we put aside our differences and unite in support of the victims and their families. Haiti is no stranger to hardship, poverty, or sorrow. As Katrina revealed in New Orleans, this earthquake will once again unmask the unbelievable poverty that exists in countries like Haiti. Nearly 80 percent of Haiti’s population lives in abject poverty. I pray that this is not simply another tragic event we see on TV as we channel surf, but I hope it reminds us of our brothers and sisters around the world and down the street, who suffer not only from tragic events — but who suffer every day.

I also want to say a word about God and evil. Pat Robertson said that Haiti’s earthquake was caused because of the country’s “pact with the devil.” I don’t even know what he means, nor do I care. But I want to say this: My God does not cause evil. God is not a vengeful and retributive being, waiting to strike us down; instead, God is in the very midst of this tragedy, suffering with those who are suffering. When evil strikes, it’s easy to ask, where is God? The answer is simple: God is suffering with those who are suffering.

Let us all keep the people of Haiti in our prayers. And let us all give what we can to help in the relief efforts. Sojourners readers are posting recommended ways of responding to the Haiti earthquake on our Facebook page. Please click here to post your suggestions there or to find ways to help.

Jim Wallis is the author of Rediscovering Values: On Wall Street, Main Street, and Your Street — A Moral Compass for the New Economy, CEO of Sojourners and blogs at www.godspolitics.com.

Tonight we'll be praying about the small groups and nurture that takes place at Tab, and so topics we'll pray for include:
The meditative / reflective space will be available again, and we look forward to seeing as many of you as can be there, but recognice that the snow might put a few off, so do please pray at home.
Posted by Jonathan at 5:03 pm No comments:

John, our Deacon for Administration, will be leading the lunchtime session today, and will be focussing our prayers on the administration of the church, and for some the wider networks to which we belong. Topics for prayer will include:
Tonight we'll be praying for nurture and small groups in the church, I'll post topics later today.
Posted by Jonathan at 11:20 am No comments:

The snow is falling once again, so if you decide not to come to the prayer meeting, or if you're unable to but would like to join others in prayer, then these are some of the topics we'll be covering this evening:

Alongside this you may want to read Joel 2:28-32 and Acts chapter 2

Posted by Jonathan at 7:04 pm No comments:

Well, the snow has stopped falling, and the roads seem to be clearing, so if you're able to join us then we'll be praying from 13.00-14.00 today around the theme of Community Development. Topics we'll cover will include:


Tonight, from 19.30-21.00 we'll be meeting to pray about the evangelistic life of the church, as well as having the reflective / meditative prayer space open once more. I'll post prayer points later for those who are unable to join us.
Posted by Jonathan at 12:31 pm No comments: 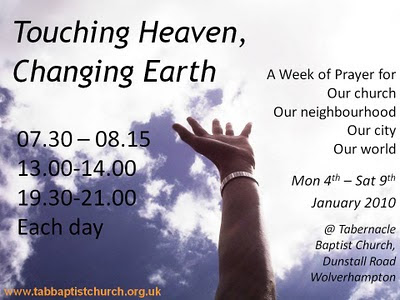 Our Week of Prayer is here, with themes of confession, repentance, renewal, revival. We're referring to 2 Chronicles 7, and using that great reply of God as a basis for much of what we share, as well as praying over the wide range of activities and interests of the church here.

This morning we had 10 hardy souls brave the very icy conditions for a time built around Morning Prayer from the Northumbria Community.

Today at 13.00-14.00 we'll be focussing on prayer for our Children's ministries. Included in the topics we pray for will be:
This evening we'll be meeting from 19.30-21.00 with a focus on the music, arts and creative ministries within the church. Alongside some interactive prayer stations we'll also be praying together for:
If you can join us, then please do, if you're unable then please pray for us anyway, we'd really appreciate it.
Posted by Jonathan at 11:30 am 2 comments: