So, if you go to a revival meeting and get gold dust, or a heavenly gem, or a promise of oodles of cash, here is a (fairly graphic) video that might give you some idea of why God made you wealthy.

I'm serious, collect that gold dust up and sell it - God's people need the money.

I guess many of us will have been looking with a mix of interest, curiosity, hope, bewilderment and maybe amusement at the events taking place in a conference centre in Lakeland, Florida, USA.

For a few of weeks now, nightly “Revival” meetings have been taking place there, led by Todd Bentley. A google or youtube search on “Florida Outpouring” will give you a flavour of what's been happening.

There are now reports of a “Dudley Outpouring” as well as others around the globe as leaders who have seen what’s been happening (normally on godtv.com or the God Channel on satellite) go to Florida and bring back what they have “caught”, and impart it to the folks at home.

So, what to make of this?

I’ve been asked for my reflections by a few folks, possibly because when the Toronto Blessing movement was at its height in the UK I was involved with a ministry (that I deeply appreciate and love) that sought to introduce people to what God might have been doing in that time. As I reflect on those times of prolonged sung worship, teaching, prayer and expectation there are a number of things I’m sure of, and some I’m less sure of.

Right off the bat, I’m unsure of the lasting effects. For some individuals there was a renewed sense of faith, a fresh wonder at God’s power, a deeper conviction of God’s love and concern for them as individuals, and perhaps an awakening of a sense of purpose and mission for their life. There were accounts of miracles, some I saw with my own eyes, and it’s hard to doubt that evidence, but I genuinely have no evidence in the long-term for any of them.

There were others though, who left the church, became more cynical, hated the underbelly of money-grabbing, showmanship, heresy, flakey teachings and practises and the hyper-emotionality of the whole thing.

I think God was doing something, and I’m convinced that often our responses to that were tainted by our own desires, lusts, longings and pre-conceived notions. And I find myself asking “How much of this has to be God for us to affirm it?” knowing that anything we’re involved with instantly becomes less than perfect.

Toronto spawned a movement that led to more conferences, more books, new songs, great excitement, and new subjects for us to argue over or chase after. I wonder if the first century Jesus followers had our access to transport and communications they would have chased around Corinth, Ephesus, Antioch seeking a blessing? Probably.

And so I look at what’s happening now with a set of questions and experiences, shaped by having done more reading and study, and having been a (very small) part of a previous movement. And what I see is just as mixed.

I see leaders who teach a real mix of good old-fashioned Pentecostalism, latter-rain teaching, some weird angelology (is that a word?), good stuff about following Jesus, and then times of no teaching at all. I see sung worship that is clearly well-prepared, and that folks respond to in ways that at time seem genuinely moving, and at other times seems emotionally controlling (how often have we misunderstood a well timed key-change for a move of God?).

In the middle of all of this, are church folks, tired of the humdrum, trained by the media to look out for the next big story, seeking more and more the outlandish, unusual and downright “channel 5 documentary” type of occurrence. Perhaps what God is doing is responding (sometimes despite what’s going on on the platform) to the reaching out of the faithful who are seeking to know and follow Him more.

But still, I guess I question the whole “next big thing” mentality. And perhaps that’s because I’ve come to agree with others who see that the kingdom might be more strongly established in the lives of individual believers through movements like this, but it actually extends through a series of very small actions.

The kingdom grows as we offer the guy next door who’s been gardening hard a glass of iced water, as we choose to send that ten pounds not to some rich preacher but to the Disaster’s Emergency Committee, invite the Big Issue seller to join us for a picnic in the nearby park, visit our friend in hospital, then share a few minutes with the woman in the next bed who we’ve not met before.. as we respond to the issue of a violent teen culture by joining the chaplaincy team in the local nick, and as we go through our wardrobes and give half of the clothes we own to the nearest charity shop.

I hate being presented with only two choices, so I’m not sure it has to be a choice between filling stadiums, or meeting one person's needs, so why does it often feel like one?

I’ve started writing this post twenty times, and it never reads quite how I want it to, it still doesn’t. So, please feel free to push me for clarity.
Posted by Jonathan at 10:17 am 13 comments: 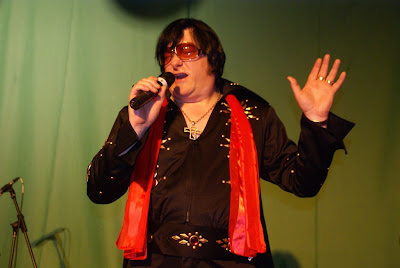 I'm in Blackpool for the long weekend. It's the annual Baptist Assembly, where the Baptist Union of Great Britian and BMS World Mission gather together for a time of celebration, encouragement, sharing news and making decisions about our future together.
I love the Assembly. It's a chance to catch up with old friends, remind ourselves of why we do what we do, and for me it's a place to have a bit of fun. This year I'm co-hosting a late-night chat show with a friend, Juliet Kilpin. Last night's show was a good start, despite some sound and light issues that we hope will be resolved today.
We had some good guests being interviewed, introduced our mascot, Embly the Bapist Ass (see what we did there...) and had ELVIS!!! It was a very Blackpool start to the shows.
Posted by Jonathan at 9:18 am No comments: