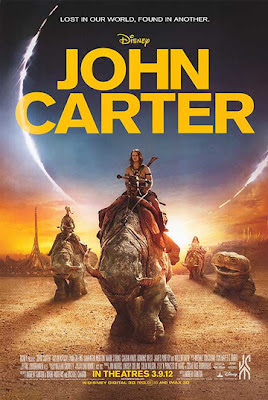 Yesterday I took some time to witness for myself what is being described in some places as “Disney’s biggest flop”, the movie John Carter.
Let me start by saying that I went with a friend, and we saw this as two guys who’ve been working a bit too hard recently, and needed something entertaining and not terribly challenging (Tree of Life sits on my desk and mocks me for not finding time yet....). John Carter was perfect for us, lots of action, lots of effects and nothing too troubling in terms of plot.
Taylor Kitsch plays the title role, and seems to be reprising some of his Gambit role from X-Men Origins: Wolverine. Battle-weary, and tired of serving others, this civil war veteran finds himself transported to Mars (a planet the locals call Barsoome) and becomes embroiled in a struggle for the future of the planet.
It’s not a totally vacuous movie as some have claimed. There are interesting spiritual themes (a Goddess called Issus plays with Isis and Jesus metaphors, quotes from New Testament scripture placed in alien mouths), and some environmental subtext about people fighting one another whilst not noticing the death of a planet. But at its heart it’s a “kill the bad guys, save the world, get the girl” romp. Think period drama meets The Sixth Element. And you know what? It’s totally enjoyable.
So, the plot has not much challenge, and it’s mostly totally predictable, but there are some lovely moments, and some humorous scenes. A few poignant reflections on the nature of leadership, family and belonging keep interest going. The battle scenes are exciting enough, but yes, the pace slows significantly between them. The bad guys are stereotypes, and the good guys quite bland, there are few Oscar nominations here, but some of the CGI was stunning. We saw it in 2D (in order to appreciate the story over a few jump effects) and the Tharks (a four-handed, green skinned Barsoome species) were the most well realised digital characters I’ve ever seen. No Jar-Jar Binks, nor Na’vi here, there were moments when they were totally believable.
I guess, when one hears the cost of making the film ($250 million apparently) that certainly raises expectations. And yes, this film could have been far better (I’m guessing not much of that money went on the script). There was some heavyweight acting talent left cringing behind some horrible plodding dialogue, which seemed positively wasteful. But I’d say it wasn’t such a failure. As action movies go, it was entertaining, as far as sci-fi, well we’ve all seen much worse.
As a way of switching the brain into neutral and being taken on an adventure, this tired guy thought it was just what the doctor ordered!
disney John Carter movies reviews