So, here are some pics of the first part of my awareness raising for the Stop the Traffik campaign (follow the link from the top of my blog for more details). Along with one of my colleagues, Simon, I had my ear pierced, on Friday, so that today, Sunday, in a special service to focus on the campaign I could have a freedom key hung from it. 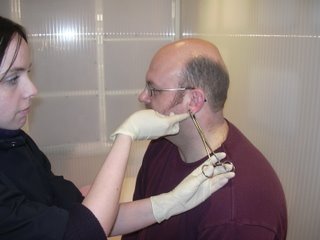 I'll be able to post the pics with the key in tomorrow, I'm awaiting for them from the photographer.

In the first pic, I am just having the needle pushed through, in the second the ring is being threaded through the hole and in the third that's how I look with the ring in. 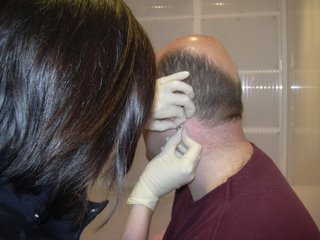 Some people have asked why I've had it done. And there are a number of answers. In part it is because I'd heard of another minister who'd done the same thing, and was inspired by that. But the piercing for me had a deeper meaning. In the Old Testament, a slave who had reached the end of their service could opt to remain with the household they had been a slave in. There are, of course, huge ethical issues and grey areas here, how real was the choice to stay or go one might ask. However, the sign that a slave had chosen to be a servant, that he was a free person who had chosen to serve was that he would have his ear pierced. It was a bit more brutal then. I sat on a bed and had a sterile needle pushed by hand through my ear lobe. A slave staying with the household he'd been serving would have had an awl driven in with a hammer, against the doorpost of the master's house. 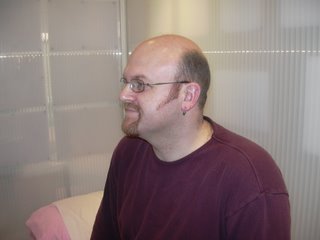 So, my ear is pierced, as a mark that I am a free man who has voluntarily chosen to subject his will and freedom to another master. It's a liberty I wish others could choose. I support Stop the Traffik because many millions will never have the choice I do, and I want them to.
Posted by Jonathan at 11:26 pm